We’re delighted that inspiring mathematician Kjartan Poskitt is our National Young Mathematicians’ Awards ambassador this year! We caught up with him to find out more about his love of maths… 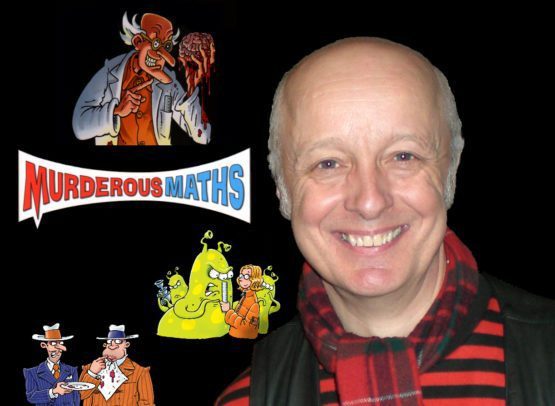 What was your favourite subject at school and why?

I always liked maths, partly because I had a couple of really good teachers who made it fun. If I ever tried to kick a football at a garage door it would go through the bathroom window… However, ask me how long it takes a car to go 5 miles at 30 mph and I’m your boy.  (It’s 10 minutes by the way.)

An actor or a comedian. As a kid, I loved the pantos and comedies at York Theatre Royal and my hero was Frank Marlborough, a wonderful actor who could bring the house down with just a funny look. When I was 16 I was in a play with him, and couldn’t imagine ever wanting to do anything else.

How did you get into what you are doing?

Well, (take a deep breath), it goes like this… while at Durham University (doing engineering) I did hundreds of shows, then when I left I went to London and ended up working on Saturday morning TV. Through that, I met Anne Wood (who created Teletubbies), who got me writing and presenting for her, and then she decided some of the puzzle stuff I had written would be better as books. Anne introduced me to agent Marilyn Malin who got me a publisher for some puzzle books. At the same time, the publisher (Scholastic) had just started Horrible Histories and they wanted one book called Murderous Maths, so they turned to the puzzle guy with the engineering degree and asked me to have a go. Just one funny little maths book was all it was going to be, but 20 years later Marilyn and I are still planning new maths projects!

Where does the inspiration for your books come from?

Why do you think that maths is so important for children to enjoy?

If kids are enjoying it, then they’ll use it more and get better at it! I always say maths is like broccoli. Some people like it, some people hate it, but you have to have a bit because it’s good for you. The trick to enjoying maths is finding the bits you need. If you’re buying stuff you need basic sums and percentages. If you’re planning a holiday you need to know times, speeds and maybe currency exchanges! If you’re involved with sport and athletics, you need stats and averages. None of this is too tricky if you know what you want out of it.

What advice would you give to children who are struggling with maths?

For basic sums, one of the best ways to learn is to get a pile of different coins and notes (or just make some notes with bits of paper) and pretend you’re buying things. What does it all cost? What change should you get? If you buy three of the same thing, what would that cost? If you were buying then selling, what profit could you make? It helps to have real items to work with (grapes, biscuits, pencils) so everything means something rather than just scribbles on paper. Oh – and even though it might be tough and tedious – learn the times tables! It’s like having a secret weapon in your head.

Why is it important to inspire a love of maths early on?

Because that’s the best time to learn – especially times tables! Hand over a few 2p coins. What are they worth in total? Suddenly you’re doing the two times table. Toss two dice and race to multiply the numbers. And better still, get a pack of cards – remove the Jacks, Queens and Kings – then deal out two or more cards. Practise adding, subtracting, multiplying … make it into a game!

What is your favourite piece of fan mail you have received?

I think the real choker for me was from the mother of an Indian girl who had been extremely shy and disinterested in everything until she started reading my books aged 10. Years later I got a message from the girl herself who had left India to study maths at Harvard University in the USA, and thanked me for it! All I’d originally planned to do was a few jokes and tricks, I could never have imagined how the books would change people’s lives.

Why are you pleased to be the ambassador for our National Young Mathematicians’ Awards?

It’s such an honour! I’ve heard from lots of kids who have been involved, and they all came away as proud as punch about it. These awards bring a bit of fun and glamour to the subject, and when it comes to fun and glamour, count me in!

Is it true you also wrote the theme tune for SMart and Brum? Tell us more!

Yes, I did, and several more children’s TV themes back in the 1990s. I’ve always messed around with songs and music. (Before the books took off I was a pub piano player for 10 years.) I have five shows published including the rock and roll “Henry the Tudor Dude” and have a studio full of guitars, pedals and lethal old keyboards. Brum was one of the first TV series created by Anne Wood when I was working with her. SMart was produced by Chris Tandy, one of my friends from BBC “Swap Shop” days and he used to love coming round to play with all my noisy toys! When he produced “The Movie Game” we spent a happy evening creating the funny bleeps that you hear when the teams press the buzzers to answer a question.

What is the most unusual situation where maths has helped you?

I had a friend putting on a West End Show called “The Dice Man”. To pay for a ticket, you could either pay a fixed price or throw six normal dice and pay £1 for each spot showing. (You couldn’t throw the dice then change your mind and pay the fixed price!) He asked me what the fixed price should be! This sum is trickier than it seems because although the average throw would be 21, people throwing about 28 or more would tend to simply walk away and not buy a ticket. Therefore as well as maths a bit of psychology was involved! I think we settled on £25 as being the best price to attract people, as throwing the dice was more likely to give them a “bargain”. We also said if they threw six 6s they’d get in free. (The chances of this are 1 in 46,656, so we weren’t being terribly generous!)

Kjartan’s books have been translated into about 30 languages and include the 18 Murderous Maths books. Excitingly, a signed set of the books are just one of the great prizes up for grabs in our National Young Mathematicians’ Awards grand final!

Dave Gibson, Sleep Expert at Warren Evans bed makers and founder of TheSleepSite.co.uk, shares his top tips for helping children to get a good night’s sleep…...

To help keep education going through this time, Charlotte Gater our Head of Curriculum has collated her 10 favourite free homeschooling resources for you to use with your...