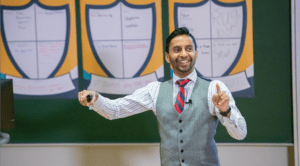 Bobby Seagull’s magic of numbers – maths guru, expert teacher, and University Challenge legend Bobby tells us how he believes we are all mathematicians and how magical numbers are!

Hi, I’m Bobby Seagull and I believe in the magic of numbers, do you?

But what about baking a cake? You may well have seen your family doing some of this in the last few months as we all stayed at home a bit more and got so interested in baking that all the flour was sold out for weeks! Well, maths is the secret ingredient in baking. It is the difference between a flat pool of goo and a tasty treat.

Baking is a maths workout. It includes everything from getting the right measurements, to calculating cooking time and making sure that if you need to make more or less cake, you can change the amount of everything you put in, keeping all the right proportions.

That’s what I find magic about numbers. They are hiding everywhere in our everyday life and if you keep your mind open to it, the magic can find you too.

For me when I was young, it was football stickers. My friends and I used to argue about what players were better. Not based on evidence, but just whoever shouted loudest. One day, my friend said Matt Le Tissier, a Southampton player from the 90s, was better than Arsenal’s Ian Wright.

The sticker books had so much information – height, ages, goals scored, left foot, right foot, penalties appearances and so on. I used maths to compare the data and find that Ian Wright was probably the more effective striker. My friends were fairly impressed, I think!

This showed me the power of numbers – to look at things using facts and see them a little more like how they really are.

Going back to our cake, the first time you make one with your family, you’re not expecting to do it all yourself first try and come out with something that looks like it came from Bake Off on TV are you? Of course, you need a bit of practice.

But all too often, we don’t think the same way about the kind of maths we learn in school. Many of us tell ourselves the same stories about not being good at maths, or it being too hard.

A lot of the time, it’s the way we think about ourselves – sometimes thoughts given to us by other people – that shape our mathematical ability.

In other words, once you believe you can’t do maths, you keep believing it. But maths ability isn’t something people are just born with.

You don’t find doctors sadly telling parents that their new baby doesn’t have a “maths brain”.

Just like any skill, from baking to reading or even video games, it’s a combination of working on it and thinking positively about your chances of getting good at it. Finding things about maths that interest you, like football stickers, for example, can make a huge difference with this!

In fact, it’s just another way that numbers are magic – the more you think about them, the easier it gets to rearrange them in your head quickly or use them to solve problems in everyday life.

Check out Bobby’s TEDx Talk where he discusses the magic of numbers and why everyone should love maths.

Why not get started by checking out Explore’s free resources including amazing workshops and activities including my maths live lessons.

Our Bournemouth centre held a Speech Competition with students from Operation China as part of a summer programme for Chinese language and culture. The Bournemouth team...

Reaching your dreams: Our journey to becoming Pilots

We love hearing about incredible people reaching their dreams here at Explore. This October, we have a whole host of workshops, activities, and more to help us discover...