Chat with us, powered by LiveChat
Back to Blog

Alesha Dixon surprises the Explore Learning Writer of the Year! 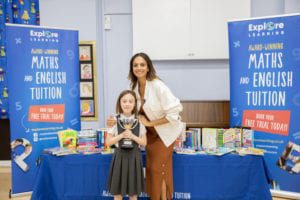 Nine-year-old Farrah Lucas from Haslingfield in Cambridge has fought off competition from 17,000 children across the UK to be crowned the winner of the Explore Learning Writers’ Awards!

Farrah’s story, ‘Masking the Problem’, was a 500-word tale to this year’s theme ‘a chance to change the world’.  It was a story about a schoolgirl living in a dystopian world where pollution has got so bad that children are forced to wear gas masks every day.

Alesha Dixon said: “Pollution affects us all. I love how Farrah highlighted a serious issue that if we don’t act on will have a devastating effect on our lives in the future.

Her story was very readable and descriptive. I was able to visualise her story in such a clear way that it came to life. It was very profound and powerful.

Farrah has done so well to be crowned the winner of the competition; we have so many creative young brains in this country and everyone who entered should be hugely proud of their writing skills and should never give up.”

The excited audience got to ask Alesha questions, which ranged from “what’s your favourite crisp” to “who is funnier: Ant or Dec?”! At least the crisp question was easy to answer: salt and vinegar McCoys! 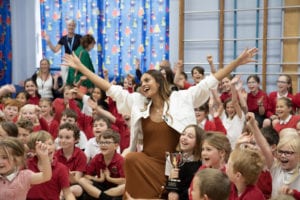 Charlotte Gater, Head of Curriculum at Explore Learning says: “We had some many amazing entries in this year’s competition and the theme of ‘a chance to change the world’ really inspired some incredibly thoughtful writing. The need to protect the environment for future generations is so important and that was very evident in the stories that emerged over the past few months. We are thrilled that Alesha Dixon could be our judge for 2019 and has chosen such an amazing story with a powerful message. We have high hopes for Farrah in the future!”

It all begins on a typical school day. I get out of bed, brush my teeth, put my school uniform on – an ugly vomit-green jumper, a neon yellow shirt and a black skirt – and pack my bag containing an E-book, my laptop and (of course) my oxygen mask. Every time I look at it, it makes me shudder. I feel like I’m in the middle of World War 2 but I remind myself I’m in 2025.

I arrive at school, and I see that we’ve been sent to the hall again to top up our oxygen as the pollution level has just been raised. Yeah, I forgot to mention that. We all have to wear masks in London now when pollution is bad. First, it was only the children with asthma, then all of us. I think back to a few years ago and realise how lucky we all were, but how naïve too. I’ve been documenting all of this on my vlog: ‘My life in a mask’. At first, no-one paid attention. Then, some kid from a small village in the north of Scotland posted something about the difference between our lives and it went viral. People started watching my channel in fear of the problem spreading beyond the big cities.

While we are topping our oxygen up, the bell goes – the bell of doom as I call it. The bell that means we can’t go outside until further notice. I don’t know where I get the idea. It might be the piercing sound of the bell or the grey smoggy colour of the day, but something snaps inside me. I run out of the hall, climb over the school gate into the busy road outside and rip off my mask. People look at me in astonishment, it’s against the law not to wear your mask when the alarm is sounding and no one wants children passing out in public. The government has a reputation to protect. They need to look like they are doing something and this is their answer – to make us look like robots or aliens!

Then it happens. People get out of their cars and begin to take pictures of me on my knees sitting in the smog in the middle of the road with my mask swinging in my hand. In a click of a button, they are all over the internet.

They say the image is like one of those famous ones now – a man in front of a tank in Tiananmen Square, a starving Ethiopian child, and me, on my knees on the Marylebone Road in 2025, struggling to breathe. The Government couldn’t ignore it anymore. Petrol and Diesel cars were abolished. For every car that was scrapped a tree was planted. Masks would never help us change things, but one girl, unable to walk down the street and breathe did.

Farrah is most definitely famous now – her friends were chanting her name after filing out from the assembly and she was greeted with cheers and applause! 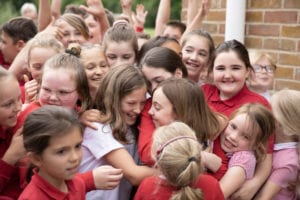 We’re over the moon for Farrah and her achievement, and have loved celebrating all the incredible young writers who entered this year’s Explore Learning Writers’ Awards!

If you know the next top author or even a child who’s got writer’s block, inspire their talents with our creative writing course.

Check out our courses

The first parents’ evening of the new school year is upon us, and primary school teachers are preparing to discuss your child’s progress over the last few...