Meet the National Young Mathematicians of 2017!

After weeks of competition involving over 700 hundred schools across the UK, children from Ladbrooke Junior Mixed and Infant School from Potters Bar have been crowned the winners of the National Young Mathematicians’ Awards! 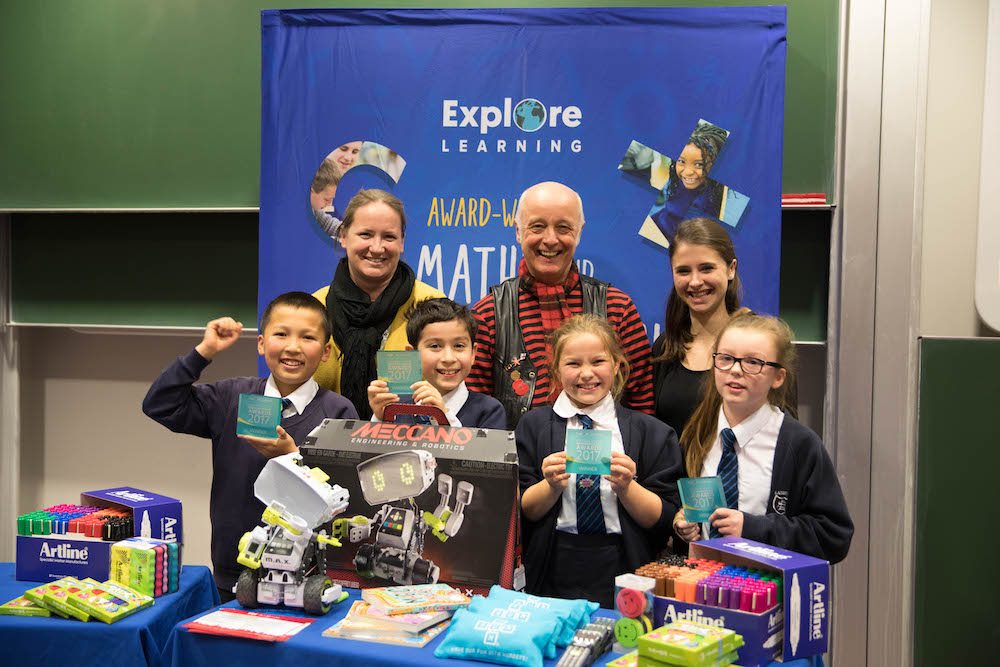 The team from Ladbrooke Junior Mixed and Infant School – Brooke Callaghan, Daisy Dixon, Vincent Lee and Joel Swedensky – battled through three rounds to be declared the best young mathematical brains in the country!

Our National Young Mathematicians’ Awards, run with the NRICH Project at the University of Cambridge, is the biggest maths competition for school teams in the UK, open to teams of four children in year 6 or below.

The team from Ladbrooke Junior Mixed and Infant School took part in the final on Wednesday 13th December at Cambridge University where they were revealed as winners and presented their trophies by Kjartan Poskitt, TV presenter and author of the Murderous Maths series of books who is our maths Ambassador for 2017!

Charlotte Gater, Head of Curriculum at Explore Learning says: “The mathematical talent we see during this competition seems to grow every single year, and this year didn’t buck the trend! All five of the teams in the final, and in particular Ladbrooke Junior Mixed and Infant School, should be extremely proud of what they’ve achieved. It was a brilliant day at the final and the results were extremely close!”

Helen Romain, Deputy Head at Ladbrooke Junior Mixed and Infant School, says: “I would definitely recommend the National Young Mathematicians’ Awards to other schools, it has been great to challenge my higher achievers who have achieved all of the year 6 objectives already! It has been excellent for developing teamwork skills and perseverance.

It feels amazing to have won the National Young Mathematicians’ Awards! I still cannot believe how well the children have done to get here. We are all so very proud.”

Ying Lee, parent of Vincent Lee, says: “The competition has been very well organised and the speed of going from one stage to another stage is well structured, so children didn’t have to wait too long and lose the interest of what this competition was about. Vincent thoroughly enjoyed the experience.

It is such an amazing feeling that Vincent’s team won. Well done to all the kids who put in their talent. Also, as a parent, I feel very very proud of my child. It gives them more confidence about maths, and more inclined to pick up puzzles and have a go.”

David Swedensky, parent of Joel, says: “My son, Joel, was really excited to attend and loved the first challenge. He really wanted to make the finals as I studied at Cambridge University. Getting here has been amazing for his confidence and the group gets on really well. Being here I’ve found out so much more and it has been a superb experience!

It’s a different type of challenge to what they see at school. Getting through even one round does wonders for the children’s self-belief. The school also has something extra to be proud of and hopefully will inspire future students.

Them winning still feels surreal – top out of 700 schools! I am incredibly proud of them all!”

Author and TV presenter, Kjartan Poskitt says: “I’m so pleased to be involved with the National Young Mathematicians’ Awards this year.  I’ve heard from so many kids who have taken part in the past and they’ve all loved it and come away feeling very proud of themselves.  Explore Learning and NRICH are always coming up with fun new maths challenges, and of course, nothing beats the feeling of getting an answer right!”

As the winners of the National Young Mathematicians’ Awards, they will now receive an incredible bundle of prizes including:

Congratulations to everyone who took part in our National Young Mathematicians’ Awards, it’s wonderful to celebrate a love of maths together! If your child is a budding mathematician, or even if they need a little boost, Explore Learning is the place to be!

The first parents’ evening of the new school year is upon us, and primary school teachers are preparing to discuss your child’s progress over the last few...