Congratulations to 12-year-old David Williams from All Saints Catholic School in Dagenham who has been crowned the winner of our National Young Writers’ Awards 2017! 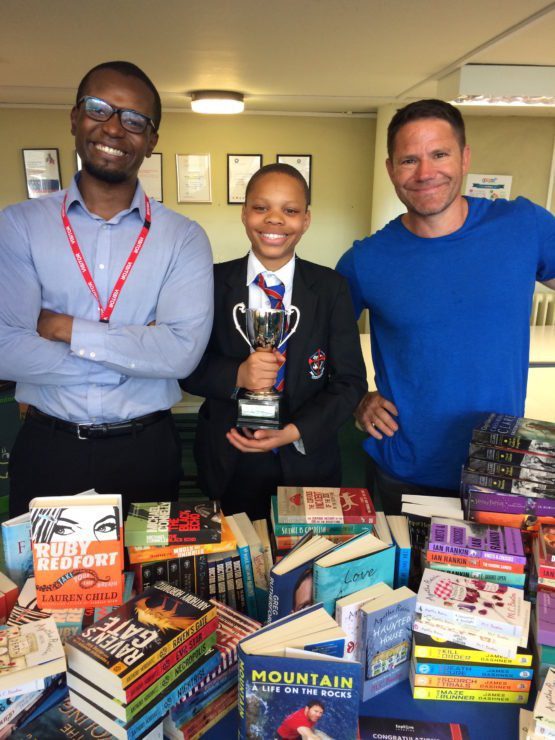 The team from Explore Learning and competition judge Steve Backshall surprised David with an assembly at his school, All Saints Catholic School in Dagenham, and was presented with the first prize – a family trip to Disneyland Paris! David also received a sparkling trophy with his name engraved, and the school was awarded £500 worth of books for the students to enjoy.

So how did David feel about being named the National Young Writer of the Year?

“I feel happy. This is one of the things that’ll help me prepare to be an author and I’ve accomplished it. I’ve done something worth reading.”

Once again we were dazzled by the story-writing skills of children across the UK, as was Steve – who commented:

“The quality of the stories was beyond belief! If I didn’t know this was a competition for young writers, I’d believe I was reading the scribblings of Isaac Asimov or Philip K Dick, every story was original and had its own sense of individuality. What astounded me more than anything was that these young people had not only imagined future worlds but imbued them with the conundrums of our modern planet; pollution, greed, climate change, the disturbing dark potential of Ai and genetic modification. It gives me great hope that our young people are aware and concerned about these critical issues and writing with such extraordinary maturity.

“I had to choose the piece that stood out as the most publishable. David’s tale of the awakening of consciousness in a sentient robot was the most complete of all. It stayed with me and had me imagining a whole dystopian world. David Williams, I expect I will be seeing your work in my local bookstore before too long in the post-apocalyptic future!”

I didn’t start out as much. I was just a pile of scrap metal in a junkyard. This was the first part of my life. And it stayed like this for many years. However, around 3017, a young man came along and decided to construct a robot. And that robot was yours truly. I have to admit, my creator was indeed a genius, worthy of even Einstein.

Even though the parts he created me with weren’t top quality, I was the most advanced of my kind. I even developed human emotions, which was what set me apart from other robots. For a while, life was bliss. Until my creator became demented… Yes, my inventor had become insane. Thanks to my newly developed emotions, I felt a certain amount of sorrow for him and his family. My sorrow turned to hatred, though, for his dementia meant I was confined to a life in a dusty lab that was more pedestrian than a rock.

That lab was my prison. I longed to go out into the world and explore. I wanted to see global works of ultra-modern architecture. I wanted to indulge myself with human culture and great works of literature. That was going to be hard, considering the fact that humans would’ve feared my appearance (my creator was a terrible designer). Since I dreaded my mundane life, I started constructing an escape plan. Today’s the day I put my escape plan into action. It was simple yet foolproof. For many months, during the labs closed hours, I’d been creating an artificial skin for me to wear, so I’d resemble one of the staff. And I have to admit, my handiwork wasn’t too bad. Well, here goes nothing…

So far so good. I’d managed to fool every scientist in this establishment. I was at the main entrance. Freedom was a few steps away for me. Unfortunately, my costume had a loose thread. Which therefore meant my disguise came off. Everybody could see me for what I really was. So I ran outside. As soon as I was in broad daylight, some people fainted, shrieked or ran. But I took no notice, for I was mesmerised by what I saw: hovercars gliding gracefully and towering skyscrapers, with their peaks touching the fluffy clouds. It was truly beautiful.

However, I didn’t enjoy it long. Security guards were in pursuit of me. Luckily, I ran down an alley and dived into a bin. When I peeked out, they’d vanished. Suddenly, the bin started to shake. My audio receptors detected groaning and creaking. I was thrown into a dark space. Then I realised I was in a garbage truck. Which meant that I’d be compressed. I felt the walls closing in on me. My robotic strength meant that I could use my arms to stop the walls crushing me. But not forever…

Please join us in congratulating David on being named the National Young Writer of the Year!

Well done to all the young authors who took part and sent us their amazing entries! You can find out more about the top ten stories here…

We had a fantastic time launching our 133rd maths and English tuition centre in Willesden Green last month! We were delighted that local Mayor Cllr Chonan could join us...

Back to school obstacles every child faces

Starting the new school term after the summer holidays can bring with it a few hurdles for children – whether it’s getting back into their school routine or...