Fractions in action: help your child feel confident with fractions

Fractions are one of the top areas of difficulty for children in their first year of secondary school. Find out how to help your child feel confident with fractions. 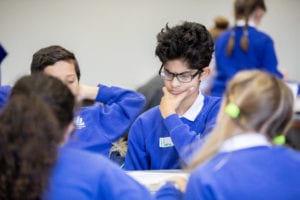 Fractions is a topic in the maths curriculum that often causes trouble for many families across the UK. In fact, some universities are conducting research into fractions because so many people struggle with sorting their thirds from their eights.

Being fearless with fractions has a strong link to number sense. If you’re trying to master your numerators and denominators just by memorising tricks or methods without understanding how fractions fit in with other, more familiar numbers, then you end up with a very long list of things to commit to memory and you are likely to stumble as the maths gets more complex.

What is it that makes fractions confusing?

The University of Cambridge’s research found that when looking at a fraction, we must understand both the values of the numerator and denominator (eg that ¾ involves the number 3 and the number 4) but also that ¾ = 0.75. Children can often get confused by a fraction that includes numbers greater than one, but actually means a value that is less than one.

Whereas with fractions, ½ is bigger than ¼, even though 2 is smaller than 4.

So what can we do?

When teaching fractions, it’s important that we help children to understand the real value of a fraction, rather than expecting them to be able to guess based on the numbers used in the fraction. Watch this handy video that can help children understand fractions in action.

As suggested in the video, you can often use physical aids to represent fractions which can help children visualise how the maths makes sense.

It’s important here that kids are allowed to practice manipulating these resources a lot until you are sure that they understand the concept of a number of parts that make up a whole.

You can then move on to comparing fractions and seeing which is bigger or smaller; this will show you if your child is still looking at the numerator and denominator individually, or if they are visualising the real value of the fraction – such as ½ is bigger than 2/8.

At this point, it can be useful to practice the concept of sharing. If I have 8 grapes, do you get more of these grapes if I share ½ of them with you, or if I share 2/8 with you? Because children can actually see the results of using fractions to share, they are more likely to understand the mathematics of fractions, as opposed to just the “trick” to solving a fractions question in a test.

And if you don’t have any grapes? Draw some! Working out doesn’t always have to include mathematical symbols to be useful.

Now that you’ve seen fractions in action, your child can practice what they’re learning with a set of activity sheets – download yours here!

Online tuition vs in person tuition: Which is better?

Today, there are lots of ways your child can receive tutoring and learning support. But which is best? We compare online tuition vs in-person tuition to...

Ethan Willis is the author of the novel ‘Blue as the Sky’. He recently visited our Bournemouth centre to kick off the Explore Learning Writers’ Awards...