Maths Week is an excuse for fun!

Maths Week England is an excuse for some fun, says mathematician Kjartan Poskitt! Hear more from Kjartan in his guest blog post… 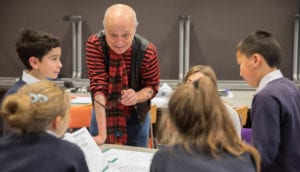 Tell us a bit about Maths Week England.

Maths Week England is an excuse for some fun! Between 11th-16th November, schools, clubs, colleges and even just people sitting at home will be getting involved in games, puzzles and challenges. There are simple activities for young people in primary schools while at the same time there are mind-melting problems for the experts to chew over! Ireland has had an annual Maths Week since 2006 and now people regularly come from all over the world to meet and do talks and amazing demonstrations.  Scotland Maths Week started two years ago, and now (yippee!) England is getting on board.  You’ll find more info on our website and Twitter.

Why is maths important?

I certainly like a bit of maths, but other people might well prefer history or languages or drama. However, in everyday life, a bit of simple maths is always going to be the one you need. Even if it’s just checking your change in shops or working out how long before the next bus comes along if you can make the numbers slot together in your head, life is so much easier! Maths Week is a chance to see some of the other stuff, and above all, to get better at it!

Do you feel that we as a nation are good at maths?

Maths tutoring and teaching has certainly improved in the last 15 years. Rather than just banging in the times tables and formulas like in the old days, maths is now presented as problem-solving which makes it much more interesting. I suspect if you compare general maths ability to most other nations we’re as good as any. However, there are one or two countries that have some extraordinary young maths talent. In particular, I’m always wary of emails from Murderous Maths readers in Singapore – they often ask questions that I’ve no chance of answering!

I’ve always enjoyed puzzles, so at school, I quite liked doing a few sums and getting a tick. But then I realised numbers do all sorts of strange things. Here’s one:  pick any three consecutive numbers (e.g. 7,8,9).  Multiply the middle one by itself. (8×8=64) If you multiply the other two, the answer will ALWAYS be one less!  (7×9=63).  This stuff quickly gets addictive!

You have supported the Explore Learning Mathematicians’ Awards previously – why do you think it’s such a great competition?

I think a bit of friendly competition is good for any subject. That’s what sports are all about, so why not apply it to other things? Taking part is the fun. With maths problems (at any level) teamwork really helps, and getting a correct answer is the reward in itself. Of course, if your team gets the most correct answers then that’s even better, but nobody who takes part ever loses. The Explore Learning competition is particularly good; it makes for a very special day out for the finalists with a chance to try some new puzzles from NRICH, and people like myself and this year’s ambassador Bobby Seagull are very proud to be involved.

What are your future plans?

I’ve got a lot of Murderous Maths shows to do, including Nottingham, York and Derby for Maths Week England. I’ve also got a secret new maths book I’ve been working on for ages (to make the times tables fun!) plus I’m always setting new maths and logic puzzles which go online every day. And when I’m not doing that, I’m also having the best fun writing picture books, including my latest “The Runaway Pea”!!

There’s still time to get involved with the Explore Learning Mathematicians’ Awards! Find out how you can take part today.