At the age of just nine years old, young entrepreneur Callum Daniel builds and codes his own robots – and has even set up his very own company to help other young people learn and enjoy this valuable skill. Here’s his story, told by ‘The Robot Boy’ himself… 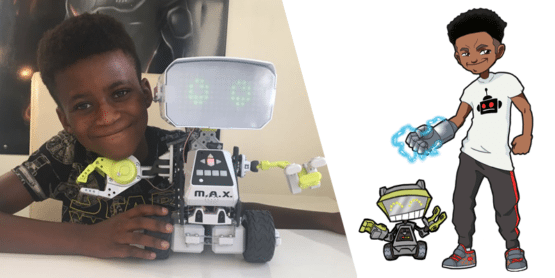 Robots interested me from the very first moment I saw one, even though I was only four years old at the time!

My mum remembers that I saw something called Titan the Robot when we were away for a weekend. I wanted to know how Titan worked and I began to wonder if I could build something similar. Knowing how excited and keen I was, mum bought me a Spin Master Meccanoid G15 KS personal robot which I built in just four weeks.

I love robots but I then realised that I could also build them, and that’s when it all began. I started searching for and going to robotic classes and lectures, anywhere where I could meet robots. At the London Design and Engineering University Technical College, I was the youngest person there taking notes and demonstrating robots.

Building my Meccanoid personal robot proved to be a hit with my friends at the Lee Valley Under 9s Ice Hockey team – I showed them different sections each week and they got really excited.  Once it was finished, my friends and their parents were amazed – and they started calling me ‘The Robot Boy’!

They made me realise that other children might want to build and code just like me, but of course, it can cost quite a lot of money. So I came up with the idea of letting children build some of my robots, and then I had the idea of starting a company where children come and build together. I wanted anyone interested in robots to have the same chance as me to build them!

So when I was eight I started iCodeRobots, a robotics company that teaches kids between the ages of 6 and 12 how to build and code robots. To help with this, we have robotic engineers and robotic students from universities and colleges. The company grew and Loughborough University London kindly helped me by sponsoring a space where children can learn how to code and build robots in a safe, secure and exciting environment.

My message to other kids is that I want all of them to be confident and never let anyone tell them they can’t do things because if people give us a chance, we can!

I also want to tell kids that robotics is great for your maths skills. Maths is behind loads of amazing things robots do! Building and coding robots teach reasoning and problem-solving skills, which you need for maths, in a fun, hands-on way. You don’t even realise how much you’re learning.

I noticed that learning to solve or think about complicated robotic projects made me more confident with attempting harder maths questions and puzzles. Robots make numbers interactive and you can use maths to make them respond to what’s around them. For example, when a robot moves around a room it’s using sensors, and those sensors turn the measurement of things around them into numbers – maths. You can use these numbers to recalculate distance, avoid obstacles, for speed and much more.

You may struggle to figure out maths on paper but that doesn’t mean you can’t be great at maths. Everyone can!

Another one of my dreams is for the children we teach at iCodeRobots to be able to perhaps build bionic arms and legs in the future. My great grandfather lost his arm in an accident and he would have loved a cool bionic arm!

After hearing how their Meccanoid G15 KS personal robot helped get me into robots at the age of four, I was so excited when Spin Master asked if I’d like to try out their brand new Meccano M.A.X. Robot and they said I was the first kid in Britain to have one which was really cool!

M.A.X. is the most advanced Meccano robot to date, with impressive robotics technology, Artificial Intelligence learning, customisable programming, Infrared Navigation and customisable apps to create a one of a kind personal assistant and bring M.A.X. to life. It’s definitely going to be great fun for all my fellow robot fans out there and the lucky kids who win them in the National Young Mathematicians’ Awards competition!

If Callum’s story has inspired your young mathematician, why not speak to your primary school about entering a team to our free maths competition?

A member from our Urmston centre decided to write an essay about his experience at Explore Learning, and it really made us smile! Aysin has been a member of our...

Congratulations to 11-year-old Gracie Harding from Westgate School in Winchester, who has been named the winner of this year’s National Young Writers Awards!...