We’ve partnered with providers of fun and educational games that we can share with our members to try out as part of our road testing programme. The latest product is called ‘Code Master‘ and encourages children to use programming logic!

Nicola, Ben and Sam Dobson had a go at Code Master – here’s what they thought:

“I originally planned to play this game with my eldest son who’s 11 years old, whilst setting up the game my youngest son took an interest and asked if he could play, as he is only 5 years old I initially said no, but after my eldest completed the first level, I decided to let my youngest try it, and he quickly picked up the game.

Both boys found reading the levels section of the maps easy to follow and were setting up each map/level on their own in no time.

It’s nice to see the boys asking to play this game instead of reaching for their tablets.” 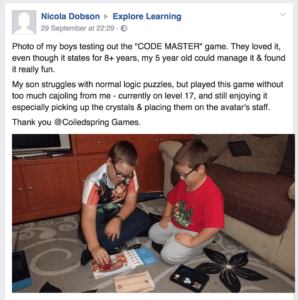 Alex Hendra shared her views about the game after playing it with her daughter:

“From a parent’s point of view, this game is attractive. We hear so much about the value of our children learning coding in this age of new technology, but we are also bombarded with worries about the effect of too much screen time on our children’s development and scare stories of children completely addicted to computer games. So a game that introduces concepts of computer coding without the screens can only be welcome.

My daughter dabbles with computer games like Minecraft and Scratch but is far from hooked on them so I was really interested to see if this game would appeal. The game initially interested her far more than I expected. We both liked the fact that it was a game you could play alone but also one you can easily play collaboratively to work out the solutions.

She hasn’t stuck with it though in the same way as she does with other games, I’ve been wondering why… I wonder if having several elements you have to lay out before you start means that it isn’t quite so immediate as other logic games. The instructions could also be a little clearer.

So, would I recommend it? Yes, gripes aside, it’s another good game to have in the cupboard, particularly for those “bored” moments when your kids need to amuse themselves independently.”

“It reminded me of Minecraft, a game that I love! I found the early levels quite easy but the further I got the more difficult it became and the more time I spent thinking. It does take quite a while to understand what to do and set all the pieces up but it is worth it. ” 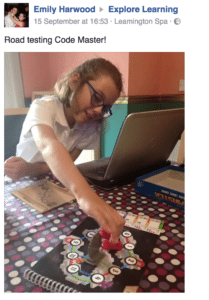 If you think Code Master by ThinkFun could be just the game for your child, you can find out more on the Coiled Spring website.

Here at Explore, we love to nurture fearless learners by getting the balance between hard work and fun just right! Children are rewarded with fifteen minutes of activities in the Surf Club at every session, where we encourage children to engage with others, make new friends and take part in some fun educational games.

Find out more about how our Explore Learning tuition membership works

Chirag Golwala, Founder of Lets Travel Services, chatted to us about how getting out and about with your child provides opportunities for learning in action! Whether a...

Two stars of our #NowICan video, Mia and Saskia, have been very busy working on their summer learning goals – find out how they have been getting on here! Mia would...