Congratulations to 11-year-old Gracie Harding from Westgate School in Winchester, who has been named the winner of this year’s National Young Writers Awards! 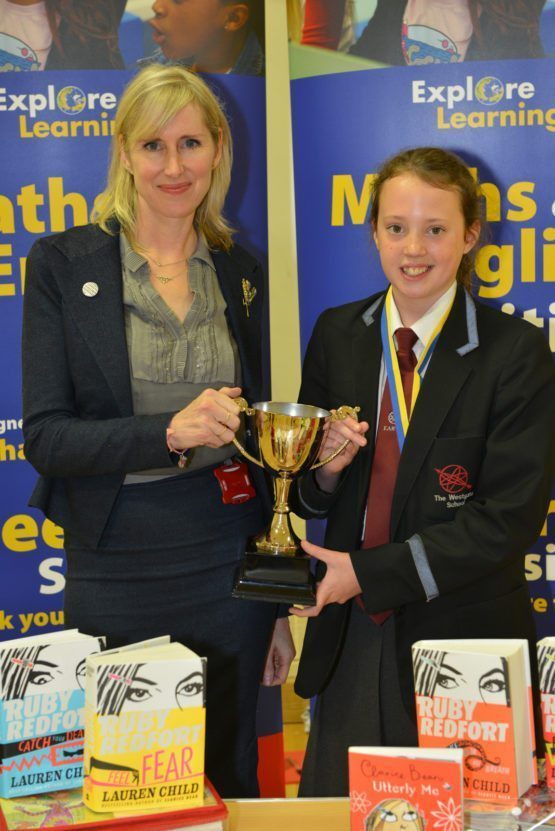 Gracie was surprised to discover that she had won the awards at an assembly at her school, with Lauren Child awarding her trophy.

Here is Gracie’ winning entry in all its glory…

This is not a good story; neither is it a bad one. It’s just a story. A story of a brave, young, rather dashing Prince and a rather fed up Princess. By fed up I mean really fed up. Anyway, side-tracking a bit: where were we? Oh, yes I was telling you about the story of our Princess, Roxanna.

Roxanna lived in, well, in the middle of a thick, dark, dense forest filled with dangers, in an extraordinary tall, ivy covered tower with cracked and broken slates and shattered windows. However, it didn’t matter as she had only one task …… to sleep and sleep and hope a Prince either called Jack, Joseph or even Jacob might come and rescue her. Well, they had clearly not done a very good job, as she had been waiting for a lot more than 50 years and was really quite frustrated. I know what you’re thinking, how can it be frustrating if you’re asleep? It’s rather simple. She woke up!

You’re probably wondering “Where are these useless Princes, who should be rescuing the lovely Princess Roxanna?” But they are closer than anyone could have imagined, in fact, here they come through the woods now.

The final thud came as young fair Jacob was catapulted over his brothers and SPLAT, into the wall with such force the whole tower shook and a rather large brick, dislodged by the force of Jacob, came shooting down and bounced centimetres away from the young man’s head. Up in the tower a silent grin blossomed over the Princesses’ face as she heard the cries of horror below.

It was a nightmare of cacophony. Each Prince attempted to climb the wall of ivy and each time, on their final pull the ivy would simply come away in their hand and they would tumble back down to earth with an almighty clatter. But, at long last, Jacob made it. Being the youngest he was the most determined to prove himself true and with surprising agility, the youngest brother scampered up the tower and somersaulted himself through the window with a yelp of ecstatic joy. He had done it! He, the youngest and most pathetic of all had done it!

Creeping softly towards the sleeping figure of the Princess edged on by envious voices below, he scurried cautiously forward… until… “Crash!” …the foolish Prince had been in such blinding bewilderment he had walked smack into the bed. Rather self-consciously he bent over the sleeping Princess and her eyes slowly fluttered open. She had found her Prince.

The next few days past in a blur and before they knew it they were getting married. As the wedding bells chimed Roxanna walked up the aisle. She was petrified but then a thought struck her… Would she rather spend her life moping about in a forgotten, abandoned tower with spiders for company than spend the rest of her life washing elegant china and Royal pants? She fled into the gathering dusk…

Who are our tutors and how do they support children in our centres? Find out from Catherine Meade, a tutor at our Southborough centre…   A little bit about me As...

Positive ways to deal with life's challenges - by HATW

Meet Si Martin, Managing Director of ‘Heads Above the Waves’ (HATW), a non-profit organisation that exists to raise awareness of self-harm and depression in...